The kitchen in Kaija and John’s one-bedroom, one-bathroom Brooklyn co-op began life as a slim galley until the day the previous owner cut the galley wall in half-height and put a little formica, opening the kitchen to the living room and creating a small fake island. I’m not sure we’ve seen this move before … underhanded! When Kaija and John bought the place, they knew they needed to work, and that little aspiring island seemed like an inviting place to start.

Although the kitchen layout worked quite well, John, a senior digital media producer, and Kaija, who works in production for an art book publisher, looked at storage space, counter prep, and storage space. existing collection and they realized that a real island would have a major impact on all three of these needs. Many of their kitchen appliances were stuck in Minnesota, stowed in Kaija’s parents’ basement after their marriage produced more treasures than their previous New York apartment could hold. A food processor, a food processor, and a collection of All-Clad pots and pans lie in the boxes, waiting to grow up in New York. John and Kaija posted their design on Sweeten and we introduced them to a Sweeten contractor for a complete kitchen remodel. Armed with a list of local websites and suppliers provided by their contractor, Kaija and John have created an entirely new kitchen around a greatly expanded island. The contractor custom built a heavy island with rows of deep drawers, using durable plywood interiors and doors finished in matte white. He also created several lines of custom open shelving to complement the window (and that mixer in Minnesota bought a first-class ticket to New York!).

The old white floor tiles were torn and replaced with Nemo Tile’s slate gray Alta ceramic tiles, chosen for their durability. The classic white subway tile, also by Nemo, was added to the main kitchen wall and extended up and down to the windowed wall, delimiting the kitchen in a new way and giving it a distinct look in the plan room open. John and Kaija chose gray grout for a touch of contrast and to complement the neutral gray floor. 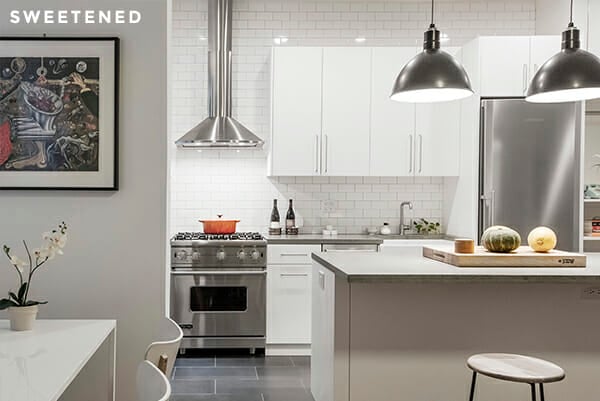 John and Kaija initially thought about going with a polished marble countertop, but were warned left and right that if anything acid spilled, it would eat straight into the luxury surface. They moved the piano to soapstone, a Sweeten favorite, but it was expensive and didn’t seem like the right choice. Originally inspired by the look and feel of concrete, they went back to the drawing board and decided to use cast concrete counters; equal parts industrial and softening. The creation process was local but a bit lengthy – their supplier sent a team for precise measurements on site after the lockers were put in. Those measurements resulted in a full-size frame being assembled off-site and the mold poured into the supplier’s workshop. Several cycles of curing, slurry, sanding, grinding and finishing took a few weeks before final installation in the new kitchen. John and Kaija chose heavy-duty appliances and fixtures along with their new custom cabinets and counters, including a Kohler porcelain farmhouse sink, Viking stove, Liebherr refrigerator, Bosch 18 “dishwasher and sleek Faber hood. Hanging lamps from Barn Light Electric really stand out against the monochromatic layers of white furniture and tile, and Kaija found a delightful set of three-legged bar stools in iron and raw wood on Etsy to complete the space.

Sweeten carefully selected contractors to match each project’s location, budget, scope and style. Follow the blog for remodeling ideas and inspiration, and when you’re ready to renovate, start your project on Sweeten.